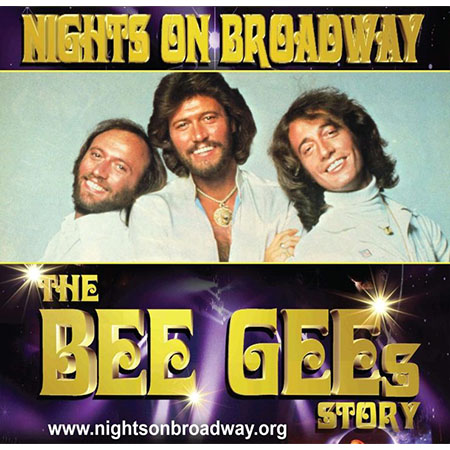 You can’t see the Bee Gees anymore, but you can see ‘Nights on Broadway’ and still experience a concert of the incredible music written by the brothers Gibb.
Known also as ‘The Irish Bee Gees’, all the performers are from Ireland with the exception of their new UK Musical Director. Having originated and sold out theatres in Ireland, the show is now touring in the UK and Europe.
‘Nights On Broadway’ presents a tribute to the Bee Gees through their catalogue of hits over 4 decades from the 60s to the 90s. The full live band blend the classic hits, acoustic medleys and dance floor fillers which define the show. This is a totally live concert experience which prides itself on musical, in particular vocal authenticity, while the accompanying costume changes compliment the show to give audiences a truly original feeling. As well as their live theatre performances, the band have appeared on each of Ireland’s national television stations (RTE, TV3, TG4).
Whether you favor the golden era of the 60s, the dance floor hits of the 70s, the comeback hits of the 80s & 90s or the string of hits they wrote for various artists along the way, this show has something to entertain everyone from the novice to the most discerning fan.